When the book and Workbook are published, supplemental images and accompanying text will be posted on this page to augment the material in print. Some images will be video clips or animated gifs that support and explain important concepts. Take a look at this page on Horses in Motion to see an example. Other materials on these pages will be color photos or diagrams that have been printed in the book in black-and-white to keep printing costs down even though it’s helpful to a reader to see those particular images in color. When that happens, a link in the book will tell you that you can see a color version of the diagram or photo on this website.

These are two examples of the free supplemental material we will be posting here once we complete our project. One is on the trot-canter transition and the other (scroll down the page to see it) explains why a horse’s mane moves the way it does during a racing pace.

1. The Trot-Canter Transition. Here are two short videos (one 2 minutes long and the other an expanded version that is 8 minutes long) of an interview in which Jo Belasco, Esq. asks Dawn Hill Adams, Ph.D. to explain how horse biomechanics influences the trot-canter transition.  Special thanks go to Rainbow, the Border Collie, who was actively listening (and panting) during this interview.

2. Why a Horse’s Mane Moves the Way it Does During a Racing Pace. During our Kickstarter campaign, Dawn posted a question to people on Facebook: Why does the horse’s mane flare out and back, then down, over and over rhythmically in the images of a racing pace taken by Eadweard Muybridge in 1887? Here is that sequence enlarged just a little so you can see a few things better, and with two black arrows added to show you an important feature of Muybridge’s photos that was essential to helping scientists see animal motion. 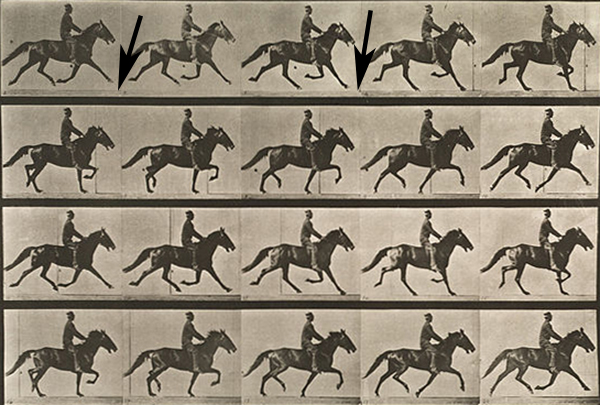 Full credits for this photo by E. Muybridge can be found here.

One of the things that made Muybridge’s work unique was that he set up a series of cameras whose shutters were triggered by strings as the horse ran down a straightaway in front of them. That’s how he got a sequence of images that represented almost instantaneous sections of time. But the other thing he did was make sure that every photo aligned with all the others. The black arrow points to the ground the horse is moving on, and you can see that this line forms a frame of reference in each image. That’s far more important than you might realize, because it allows you to compare the images in an absolute way. You don’t have to worry that the ground surface is a little higher in one place than another, or that the horse is at a slight angle to the camera in one place and not another. The images can be compared directly. And that allows us to take the first important step in solving the mystery of the horse’s mane — and learning something new about horse biomechanics as we do.

Here are two frames from the sequence. In the one on the left, the horse has two feet on the ground. I’ve tinted this image a pale red for what we’re going to do next. The image on the right is of the horse at the suspended phase of the pace when all four feet are off the ground at the same time, and I’ve tinted it slightly blue. 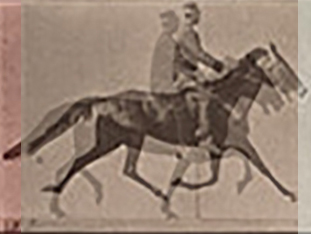 Now here are those two images (two-feet-on-the-ground and suspended) superimposed, using the ground line (that I indicated with the arrows in the big sequence image above) to line them up exactly. I moved the blueish suspended phase a bit to the right of the reddish two-feet-on-the-ground phase in this image so they aren’t so tangled together. That way you can see where they are vertically with respect to each other. 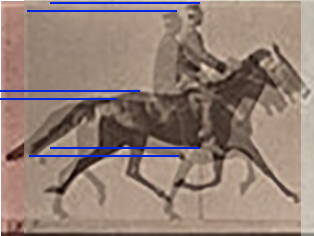 In this next picture, I drew horizontal pairs of lines to three reference points so you can see just how much higher in the air the horse is during the suspended phase of the pace. If you compare that elevation, you can see the horse is rising several inches up into the air during its pace as it hits the suspended phase, then coming back down to the ground again. When it hits the ground, the pastern area flexes and absorbs the shock of impact. You can tell because the fetlock drops down behind the hoof as this happens. So at the lowest point of the pace cycle, the horse’s body is lower to the ground than it is when the horse is simply standing still, because the pastern is not flexed this way when a horse is just standing quietly. And at the highest point of the pace cycle, the horse’s body is higher off the ground than it is when the horse is just standing still. The horse is going forward as it paces, but you can see its body is also going up and down in a rhythmic way, too. That kind of up-and-down motion is typical of many gaits (in many animals, in fact), and it’s something the book explains more fully. But what we need to remember right now is the question that launched our exploration: why does the horse’s mane move up and down rhythmically the way it does during a pace? 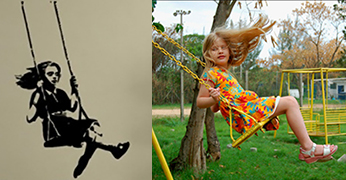 Even though the swings are in nearly the same position in both pictures, the girls’ hair tells you which direcion the swing was moving when the image was made. The girl on the left is swinging forward, whereas the girl on the right is moving backwards.

So let’s look at an example with which most of us have personal experience: swinging. If you’re a woman, you probably had long enough hair as a child that you remember how it felt when you swung forward and back. When the swing goes forward, the swinging child’s hair streams out behind. When the swing moves backward, the hair suddenly moves forward and wraps around her face. You can tell which direction the girl is swinging in these two images, in fact, by looking at how the girl’s hair is moving in each one.

Hair is loose. So when the body to which it is attached changes the direction in which it’s moving, the hair doesn’t move with it right away. Its motion lags behind. In physics terms, we say the hair has inertia (and that its motion is described by Newton’s First Law of Motion). In the case of our question about the horse, the horse’s mane moves according to the same law of physical motion. The mane hair has inertia when the horse’s body moves, just like our hair does when we swing.

So as the horse goes up into the air in its suspended phase, the horse’s body rises but the hair on its neck and head lag behind and don’t move yet. This means the horse is moving up “through” the mane, which therefore drapes downward around the horse’s neck. It’s analagous to the situation of someone swinging backwards whose hair wraps around her face. 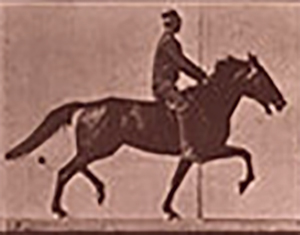 As the horse starts to come downward again, out of the suspended phase of the pace, the body is falling or descending — but the mane hair gets left behind. So it streams upward like the hair of a girl swinging forward. Because the horse is also moving forward at the same time, the mane’s streaming-out (left-behind) motion is also slightly backward. The mane continues to lag behind the whole time the horse’s body is descending, even during the time it keeps going so far downward that it flexes the hock the way you see in the red picture we started with, the one I have reproduced once more to the right. This picture is like the one of the girl swinging backwards in the picture on the right of the swing pair above: looking at just the body you might think the horse is already pushing its body upward. But the mane tells you the truth, which is that the body is STILL moving downward at this point of the gait cycle. It’s only in the next two frames of the sequence that we start seeing the “tangled” mane position that indicates a change in the direction of motion — like the “tangle” of directions this little girl’s hair is moving in as she hits the point of changing direction in her swing. 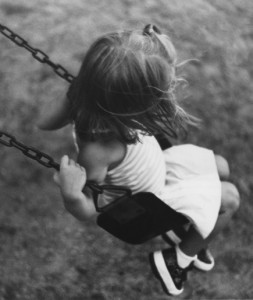 This little girl is at the “top” of her forward swing cycle and just starting to change direction to swing backward. So part of her hair is still streaming out behind her and part is already wrapping forward around her face.

The horse’s mane, then, tells us how the position of its body is changing in space as the horse moves. Because the hairs of the mane have inertia and get “left behind,” they show us when a horse’s body is rising or falling. And if you think about riding your horse, or watching a horse that’s moving in a pasture, you know this means there’s a lot more up and down motion going on than you might have realized. And that’s precisely true. It’s one reason riding fast gaits is harder than riding slower gaits. And it’s also a reason you might look again at the animated gif of this sequence and be impressed by the steadiness of the rider’s seat. Those up and down forces are acting on his body, too, and his body also has inertia. But you never see a gap between his seat and the horse’s back, nor do you see any other sign that his body is having to react to the constant change in direction from upward to downward and then downward to upward again. But that’s what’s going on. He’s riding with very good feel.